Comments Off on The Euthanasia of Dreams, the Place Where All Service Terminates 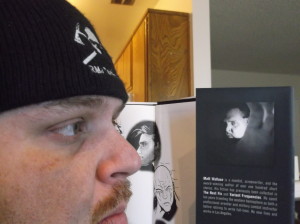 Nikki, my fiancée, is a truly strange and rare collection of vibrations, all tuned to a single sublime frequency. To me the most exotic thing about her is that, apart from meeting and falling in love with a broke-down piece of meat like me, her life has thus far panned out pretty much exactly the way she planned. That’s mind-blowing. That’s a bizarre and arcane feat. I don’t generally believe anyone’s life unfolds the way they expect. But Nikki formulated a plan early in hers and, with discipline and determination and because you could lob a grenade in her path and she’d walk through the concussive force of the explosion without breaking stride, she worked her ass off to execute that plan. She worked her way through college, attended law school, passed her bar exam on her first sit, found a good job at a successful firm, and saved throughout her twenties to purchase her own home. She’s the most impressive, singular person I’ve ever known. I’d never met anyone as together as her at such a young age. I’d never met anyone who knew what they were doing so early in life and actually followed through.

But even that’s not entirely true. Nikki was, in her earliest years and throughout her teens, a competitive semi-pro golfer. She was very serious about it, and she was good. Like, really good. She still is. She can drive a golf ball like it’s her X-Men power or something. She was on track to becoming a pro, and it’s something she wanted that was a real possibility. Then she dislocated both her knees and she was pushed far too hard at it to the point where her desire and passion for the sport curdled. She opted to quit and focus on a stable future, and no one can argue with the results.

I think about the most successful people I know personally outside of publishing and the entertainment industry, and there’s a common thread woven through the tapestry of their lives. They all had to let go of a dream they attempted to turn into their reality. Major League baseball player, pro-golfer, actor, filmmaker, whatever. They all made serious runs at the big goddamn marquee versions of their lives and inevitably had to turn loose their tenuous grasp on that ideal to pursue greater success in a more traditional, stable professional setting. Now, to be fair, living and working in LA I know just as many people who have turned that version of their life into their everyday, even if they had to temper their dreams of being that thing. But, in continuing and equal fairness, I am not yet one of those people. I’ve had middling-to-moderate successes as a writer, good years and bad years and worse years, and I still fall far more into the category of the folks I know who rode that first dream of their lives to the end of the line, the place where all service terminates, and then boarded a new train to somewhere better. My line hasn’t reached the end of the track yet, but I can hear the conductor’s voice growing weary as they announce each progressive stop, anxious for the the ride to be over so they can go the fuck home. 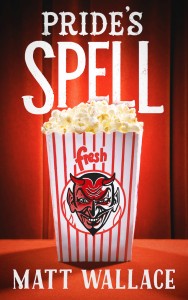 So, here’s me, turning 34 years old next month, and I’m still plugging away at my earliest dream of being a writer. And I have monetized that dream to a not insignificant extent. I have earned the right to call myself a professional writer. One week from today I have a new book coming out. It’s called Pride’s Spell. It’s the third in my Sin du Jour series that I’m doing with Tor.com Publishing. A couple of weeks ago I received my customary box of comp copies.  That’s always exciting, I don’t give a damn how long you’ve been writing or how many books you have published. And Pride’s Spell is an absolutely eye-seducingly gorgeous book (seriously, no one can touch Tor.com Publishing’s art direction and cover design. It’s sick). I turned the first copy over in my hands and snapped a series of pics of the front and back covers and spine with my phone, posted them proudly, flipped through the pages. I didn’t even find a typo (in your ear, Gaiman). It all made me happy.

But something else occurred to me this time around. Those boxes with their stacks of identical bound pages always sort of remind me of a briefcase full of cash of the kind you’d see in some illicit dealing in a movie. I thought about that as I pulled book after book from the box and stacked them on our dining room table, and I realized what a beautiful, fitting analogy that actually is. This is what working in publishing so often nabs you, I thought: boxes of paper you can’t spend.

It’s difficult not to be jaded, not to be cynical. The last couple of years of my life have consisted of basically rebuilding my writing career from the ground up. I went from having a steady gig writing a TV series that paid well to not booking a next gig to realizing I was once again standing before the great metaphoric drawing board and it was blank. My ultimate goal was and still is to create and write my own television series. I had to ask myself of what did the shortest, most realistic path to that goal consist. I decided to start with a property, a Thing which could be made popular and sold and adapted to other mediums. Because I heard from some asshole that’s “in” right now. I looked at publishing, which I’d abandoned some time before over a variety pack of frustrations I won’t go into now, and to maintain my sanity and not starve I had to suss some way to avoid the penniless time-sucking vortex that so often is traditional publishing.

I settled on two things: Not waiting, and novellas. Serialized novellas. The market was and is primed for them, I thought. And I’d already been thinking fiction publishing needs to adopt the product funneling ways of video games. Doing four or five short books instead of one big book and feeding each one into the next just makes more sense from every angle, financially, promotionally, and even creatively, especially if you’re looking to create an episodic property to adapt to television.

I started by self-publishing my own novella series, as sort of a proof-of-concept for myself and everyone else. I went from that to pitching a series to Tor.com Publishing’s new novella line. That became a book. One book became two, two became four, and now I’m contracted for all seven I’d originally planned. That deal and those books helped me land a new agent in New York and a new entertainment manager in LA. That new team led me to shopping my books for TV, and that led to trotting out unsold pilot scripts and taking a fresh run with that as well. That’s all been this year, and we’ll see where it goes. There’ve already been setbacks, and there’ll be more. That’s the nature of the beast.

But I’m proud of all of that. It’s working. I saw the shot, I lined it up, and I sunk it. For once. I have many more shots to take, but my game is strong right now.

I’m proud, but I’m not excited and fired up the way I would’ve been in my twenties. You see, I’ve been working at this writing thing for almost ten years now. I spent the previous ten years, all my formative teen years and the best years of my twenties, trying to make pro-wrestling happen. That was my first serious run at the big goddamn dream career. I had to give that up in my mid-twenties. At that point I should’ve probably taken up commercial welding or studied the stock market or bought a fucking hot dog cart or basically done anything except what I did do, which was return to the first thing I ever wanted for myself, being a writer. But I legitimately felt it was my most marketable skill that didn’t involve causing serious injury to others, and besides that I don’t function well in a group dynamic. Go figure.

So, I have to ask myself: Have I moved on from the untenable dream to the successful career, or am I simply chasing another version of that ideal? Will I inevitably, invariably have to give this one up too?

And this is the most terrifying point in my life to be asking that question. I’m no longer 24 or 25 years old. I ain’t fresh, I ain’t pretty, and despite Louis Armstrong’s best intentions I do not have all the time in the world. I’m getting married in six months. My fiancée and I want to buy a bigger home. We want to travel more. We’re starting to talk seriously about creating smaller hybrid versions of ourselves. This is the time in my life to Know, and there are still minutes, hours, and days when I do not Know. But neither can I slow down, let alone stop, to brood and ponder and question myself. It’s perpetually the Year of the Shark; move and keep moving, or die. I’ve committed to a course of action, and I’m going to follow through. It will work because it has to work.

I look at Nikki and tell myself that I have a plan, just like she did, it simply took me ten years longer than her to arrive at that plan. And I do know where I’m going and how I plan to get there, as much as one can in a business as variable as a Rubik’s Cube the size of a Ford Fusion. I tell myself the answer to that question I have to ask is “yes,” it’s just that the “yes” is pending.

Having a book published is a fine thing. It’s a satisfying and rewarding thing. Having an on-going series of books (there will be at least four more Sin du Jour books after Pride’s Spell) is an even better thing. It’s not an easy thing to accomplish, particularly with a large publisher (subsidiary of subsidiary thereof, but either way).

Having a book published is a fine thing, but unless that book defies virtually every statistical probability to become a genuine phenomenon, it’s not The Thing. It’s one more step, at least if you’re serious about a career. And I’m very serious.

One week from today I’ll take that next step and, as I’ve done before and will again, I’ll look up at all the steps I have left ahead of me. Maybe it’ll look like the steep climb up an Inca Pyramid and maybe it’ll look like trekking from the basement to the first floor. I can’t really know which it is until I reach the top, and I won’t do that unless I keep moving.

I’ve already seen the place where all service terminates, and that’s not a ride I plan to take again.